Dadda's first week back to work....

.....and we survived!!!! While I am writing this I am watching Gabriel on the monitor - he really comes alive at night (now we know why his foster parents had him up until 11 or 12 - mega extra cute at night). He doesn't cry when we put him down (well, maybe a few times he did) and I don't have to stay in there with him but he moves all over the bed! He flip flops and says "gah gah gah" (or is it "guy guy guy"). So when he is practically sitting up and I see him on the monitor I just use the remote to say "no Gabriel" (or even just Gabriel) and he lays right down and doesn't move. It's actually pretty funny. Then he gets up again after remaining perfectly still and a few minutes later we do it again. I must record it because it is funny - no not mean at all - don't need to call the social worker! He is so funny!!! I am telling you, this kid is a night owl!!! He does sleep the entire night but his crazy personality comes out at about 7 pm!!!


Back to the week we survived while Dadda went to work (which I am so grateful to as I get the best job in the world - being home with these two incredible kids). Monday was really tough. So tough that when Eric came home Monday one of us had to get Anthony to religious ed and he said he would when I said no way, I'm going!!!!! I just had to get out after Gabriel cried over just about everything that day. It got better throughout the week though. I mentioned in an earlier post that I took him to story time on Tuesday where he flipped out at first (got better and he loved it). Wednesday I took Anthony and Gabriel to Come Learn with Me. It was a small group and they both had a great time. The week went really well overall. Gabriel is really starting to come around. We have a regular routine that includes taking Anthony to the bus stop in the morning. He really, really loves Anthony. He has the biggest smile on when he sees him (a huge smile when he sees Dadda too). As a matter of fact he was looking for Anthony while I was changing him and I said something to Anthony about it. Anthony asked why (the usual) and I said because he loves you. Then I said to Gabriel, "You love Anthony right?" - not expecting an answer - he said "I do"!!! We both looked at each other and said "wow"! So we called Dadda on his way to work to share it. I asked Gabriel if he loved Dadda and he said "I do". Now of course this is probably just another version of him playing ahhh chooo but we will take it! 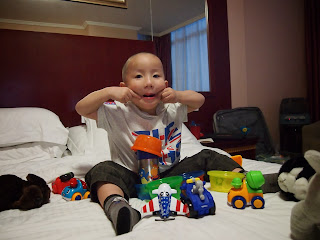 
Today Gabriel and I looked at the handsome boy in the mirror and we kissed the mirror. So tonight for jammie time we did the same thing but with "Mwuahhh" and sure enough he was saying "Mwuahhhh"! Yeah! And we ran to Dadda to show him and he blew Dadda a kiss with "Mwuahhh" attached to it!!! This little guy is way too cute!!! Did I mention he knows HUGS???!!!!! He loves to give us hugs!

We have our Hopkins International Adoption appointment on Tuesday with an incredible doctor! Dr. Dibs has already emailed me and answered every email of mine immediately and she even called (& answers her own phone). She is very knowledgeable and so kind. I am looking forward to meeting her. Our biggest concern is Gabriel's weight. I thought he gained 2.5 pounds but he didn't keep it on (or the scale is off which is possible) because the last time I weighed him it was only a 1.5 pound gain. I am certainly worried about this (along with the lack normal poop - TMI?). Dr. Dibs said that it's pretty common for a child to have a head that small and be small (am I suppose to feel good about that? - deep breath - he seems to be ok cognitively so far)!

Well, a good week indeed! A great week - lots of prayers and answered ones!!! Speaking of answered prayers......Walter (prayers asked for in a previous post) is doing so much better. He is still in ICU but is doing better. He still needs lots of prayers so please keep them coming!!! Another big wow in the adoption world....there was this little guy who we saw when we already received our LOA for Gabriel. He was 5 and left in a crib ALL of his life. He is missing the lower part of one leg and was basically ignored in a REALLY BAD orphanage (one that is known for tying kids arms up in cribs). His sweet face called out for a Momma and his Momma found him!!!!! This incredibly faithful family has decided to call him their own. If that news wasn't great enough his Momma was able to get him into a new home in China at Love Without Boundaries and I saw a picture of him after being there less than a week - his smile was just amazing, so alive!!!! It is amazing what a little love can do and boy is him in for a lot when he gets home to his forever family!!!!! My words for the day...God is sooooo good!!!! Take a minute to pray for the many China orphans that are so close to aging out for their 14th birthday- aging out means they are not considered adoptable anymore and their future could very well include being sent out to the streets AT 14 YEARS OLD! Think about what kind of future they have when they walk out of the orphanage gate....I can't even type what happens to them....please pray for those beautiful children who will soon age out - may God guide their forever families to them!!!

Thanks for checking in!!!